As most of you hog followers on facebook already know, Ymir was greenlit last week after 11 days. I’m really happy that it went pretty smoothly and gratefull for all the support , votes and sharing you guys did for the game!
Also thanks to Elissa Park for doing this new voice over in the updated video presentation for the Greenlight.
This had kept me busy for the last weeks and now back to regular development.

Also a special thanks for my good friend Alexandre Chaudret who made well… i beleive it to be the first fanart of Ymir , for the celebration of this Greenlight. Behold Lucius Porcatus! ( Also clic on that hog to check out his awesome other works! ) 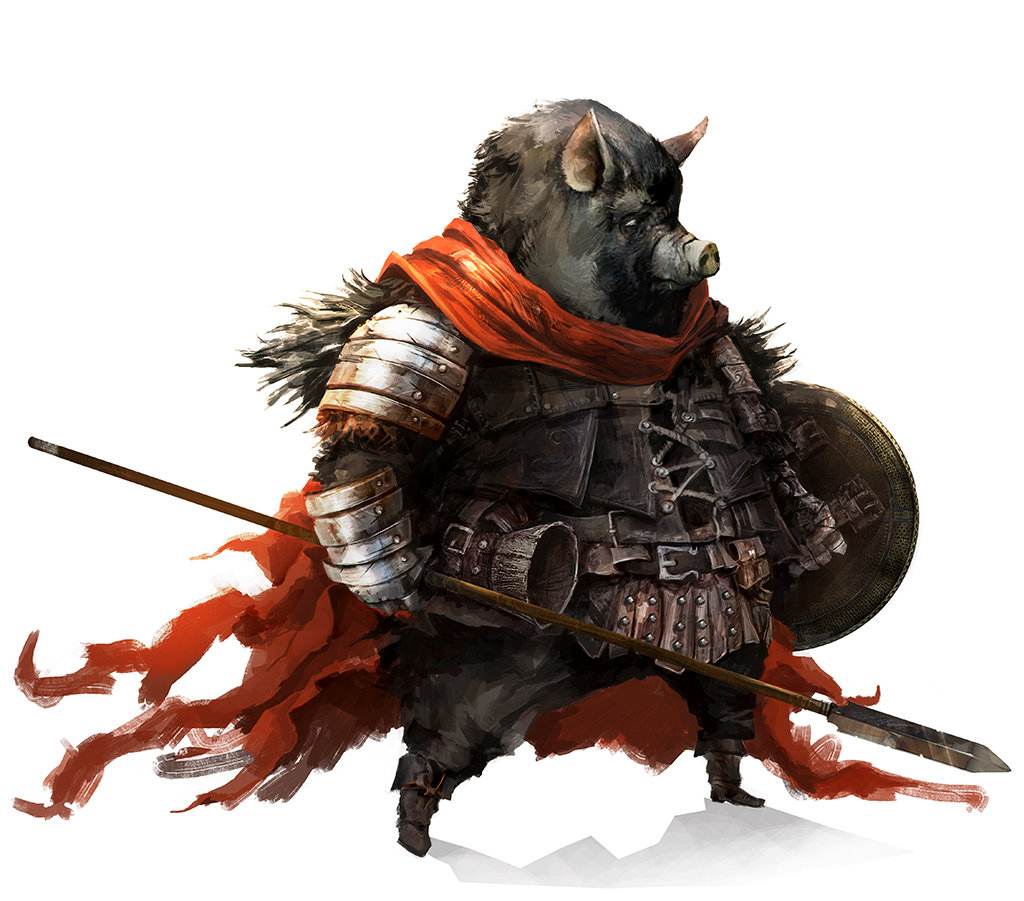 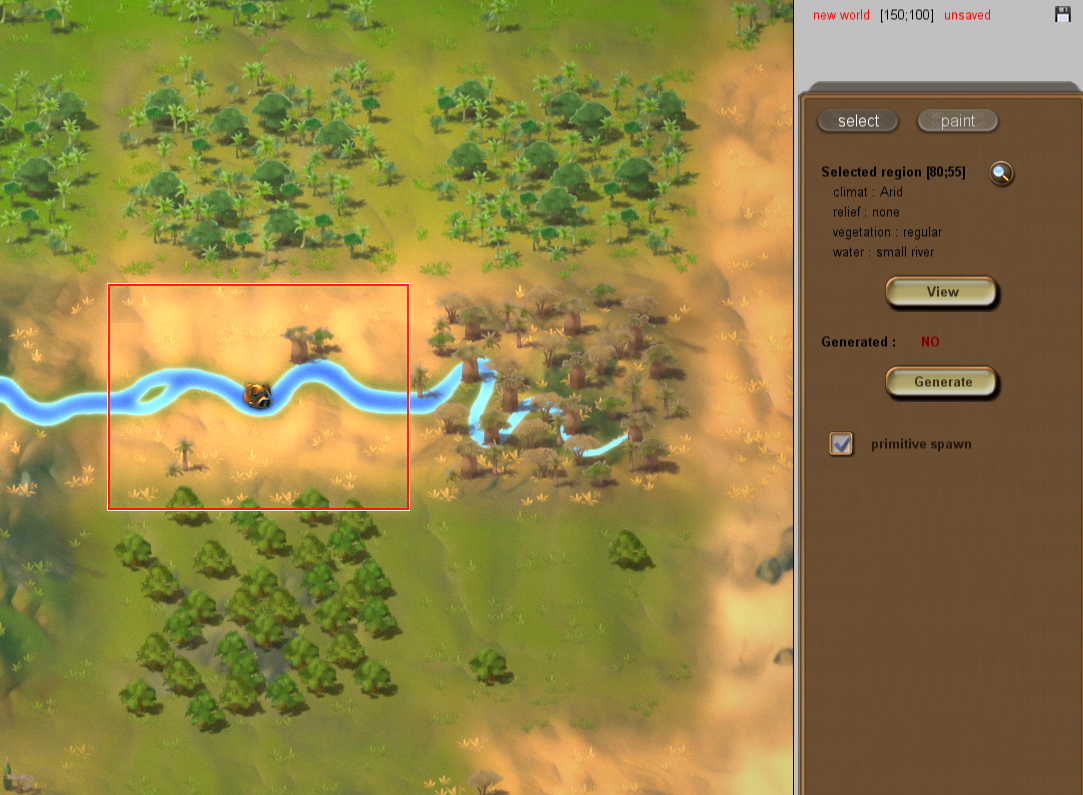 Now besides that what’s new…
I’ve finished the basic functionalities of the editor.

I added the support for “primitive spawns”.
Primitive spawns are regions that can potentially host a primitive tribe when the game starts. Basically a player spawn, as when a player joins the game he takes control of one available primitive tribe.
Unlike the alpha 1 prototype where things were more random causing problems at game start, these regions ensure the presence of at least :
– One meat source ( wild animals )
– One alternative food source ( generally a cultivable food source like wheat )
– A small fresh water source
– A small clay deposit
When a map is generated, it randomly sets some regions as a “primitive spawn” ( generally regions with a natural source of fresh water like lakes and rivers ), but this flag can be set manually in the editor when creating custom worlds. For exemple this way you can create a world with continents where no player can initially spawn on.
These starting resources will probably change as the game gets balanced, but the tech to allow specific resources for starting regions is here.

Also i now started working on the game creation setup and the “New game” menu. 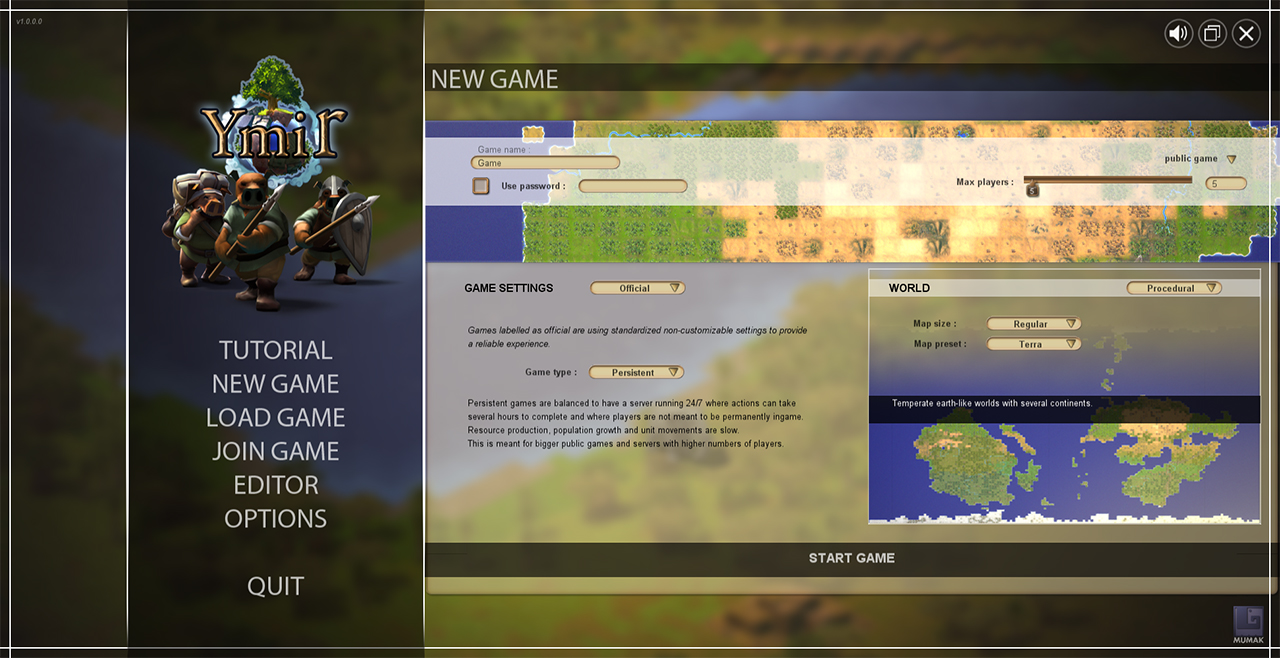 WORLD SETTINGS
You can choose between procedural and custom maps.
A custom map is a map manually created in the editor.
A procedural map is generated automatically with different settings. You can set these settings yourself or use presets like “Terra” that generates standard Earth-like maps.

GAME SETTINGS
Game settings have 2 different modes : Official labelled games and custom.
In an official game, you cannot customize settings and -if ever one day- mods will not be allowed . Official games offer standardized game-balance and speed presets for a reliable game experience so players won’t have to struggle looking for real “vanilla” games.
Theres is for now 2 types : persistent and real-time. Persistent is the official preset made for games meant to be run 24/7 in a more “MMO” experience, with higher player number and where players are not supposed to be ingame all along. In this mode things like resource production , population growth or units movement on the worldmap are slow and balanced for a server running permanently.
Real-time is meant for smaller games, such as a private game played with a small group of friends and where all the players are supposed to be ingame at all times. This is a game meant to be played, stopped and reloaded for the next session, and where things like resource production will be fast enough to keep players busy in real-time. Think Anno in multiplayer.
But you can also create a custom game. While it won’t be labelled “Official”, you’ll however be able to set your own balance by tweaking the game parameters like construction speed, resource production multiplier and cycle duration, unit speed etc…

WHAT ABOUT STEAM
Now that the game is greenlit, there is actually a set of administrative things to do in order to complete its registration before i can fully acces Steamworks , including getting a US Tax identification number which can apparently take a while… 🙁
After that, i can start discovering and learning how this all works and test/continue the development in steam, which will take a while ( that’s why i needed this greenlight this ‘early’ ).