Highlight of the new building UI and resource production 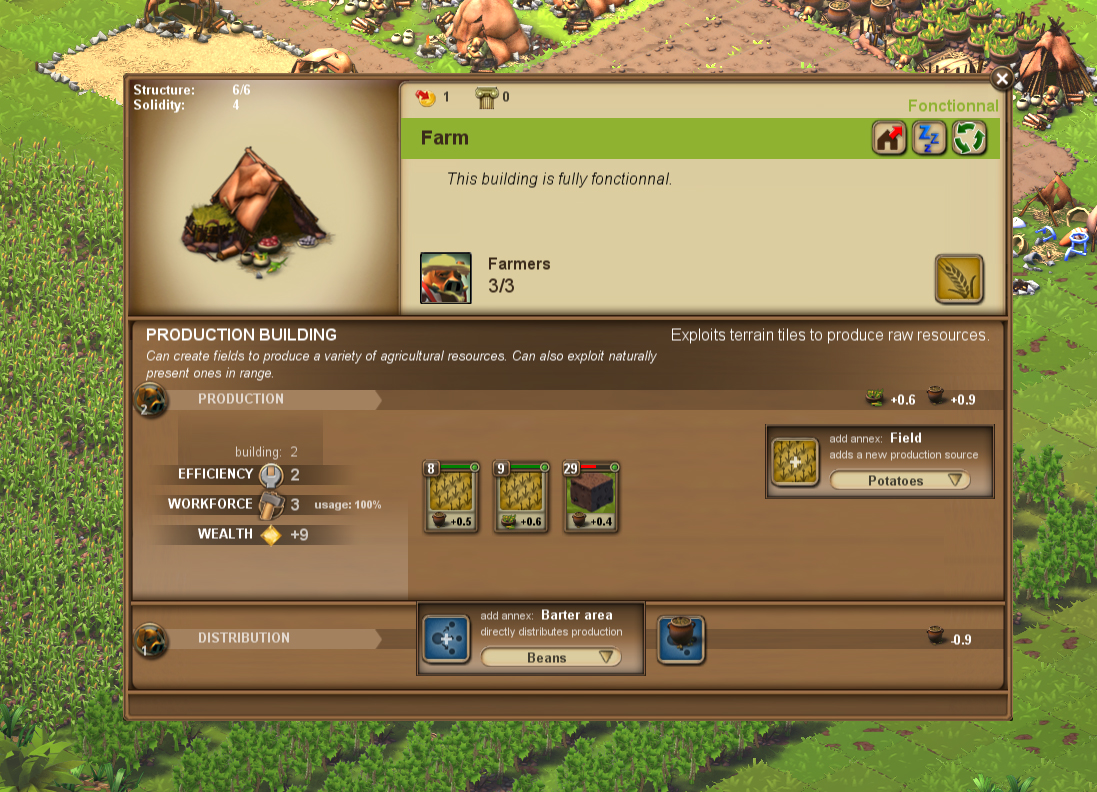 Here is a screenshot of the new building UI, in this case for a production building.
I’m going to explain a bit what it tells us about this particular building.
The top part gives us general informations about the building while the bottom is specific to its role ( production ).

Then there’s the role specific UI on the bottom. Here its the UI of a production type building.
Its divided in 2 parts : production of resources and distribution of these resources.

Annexes
It also shows the available annexes for this building. Annexes are sub-buildings that belong to a main building.
In the case of this farm, we see it can build “field” annexes giving additional resource production, and you can choose what type of crops you want these fields to grow.
It can also build a distribution annex , the “barter area”, allowing to distribute produced goods directly to the population.

Production and distribution
We see 2 of the farmers are busy producing while the 3rd one is busy distributing, selling some of the production directly to the population using one built distribution annex.
The building is producing 0.9 of beans and 0.6 of corn, and all the beans are distributed by that 3rd porco . The remaining production (here the corn ) will go into granaries or be sold by merchants. Production is always expressed “per cycle”. A cycle can last a variable amount of real time depending on the game settings. If you’re playing in a persistent 24/7 game its likely to be 2hours while in a ‘realtime’ game it would be something more like a minut.
The building has an efficiency of 2. That depends of the building itself but eventually will also depend of techs, connection to roads and placement.
This, combined with the actual number of porcos producing, defines the actual workforce of the building ( 3 ). This workforce is used to work all the production sources available : 8 fields of beans, 9 fields of corn, and 29 wild beans in range of the farm. The 2 farmers are 100% busy working these and while the fields are properly exploited, we can see they don’t have enough workforce to also fully exploit the wild beans. To do that we’d need more workforce, so if we wanted we could upgrade the farm to increase its efficiency or put back the 3rd porco in production (but the farmers would lose the income of direct distribution which is higher than selling to merchants ).

Wealth
This farm is adding 9 to the total region wealth. Wealth produced by buildings is directly proportional to the amount of busy workforce of the building.
Total region wealth is then splitted between all the inhabitants of the regions depending on their respective incomes. A porco’s wealth defines its purchasing power and therefore the price of goods in the region (as merchants will continuously adapt to the available market), so its pretty important to increase it. Think of Wealth as some sort of objective unit of GDP.

3 Replies to “The new building UI”