This update adds new tools to show different informations in regions, such as heights, ground fertility, or impassable edges as well as the ability to toggle the display of terrain heights allowing you to see the region on a flat plane.
It replaces the infamous “T” debug placeholder tool. 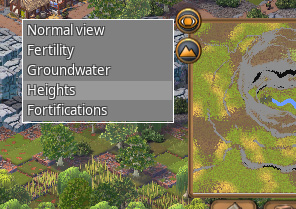 The display modes are available from a button located near the minimap.
Another button allows to toggle heights on or off at any time regardless of the currently displayed layer.

The display layers update
v0.0.26.x
– added new system of region layers display.
– added ability to toggle heights display on/off.
– removed “T” debug tool.
– added fertility, groundwater, heights, and fortifications display layers.
– added auto-enabling of display layers when placing some buildings (farms and walls).
– lowered state power cost of national armies from 5 to 3.
– fixed issue when disbanding a formation containing troops partially manned.
– fixed bug where battles registered as a loss when defending a territory only with allied armies.
– fixed infinite battle bug caused by problem with retreating units.
– fixed infinite battle bug caused by problem with hunting with multiple formations.
– fixed bug allowing to recruit and access resources in occupied territories.
– fixed various issues when moving nation members in the hierarchy.
– fixed issue when subjugating your own superior in a nation: now triggers an automatic rank swap within the nation.
– climate AP modificator is now disabled in cities.
– fixed bug with cancelling treaty offers
– honor commitments in treaties lowered to 50 max.
– fixed neutral armies in battle having their AP depleted as well.
– lowered VP missions reward to 1VP.
– fixed issues with the subjugation action.
– improved choice of region for retreating armies: now prioritizing adjascent controlled territories.
– if a character is dead/powerless, the nation maitnenance costs of its subordinates are now relayed upon its own superior.
– subordinates now pay no taxes/state power if their superior is dead/powerless.
– fixed “join faction” treaty term conflicting with other treaties and not causing them to be broken.

This new update brings changes to war and territorial statuses!

Every time a territory is invaded during a war, it now gets a special new territorial status of “occupied territory”, which costs no state power and no maintenance, but provides no income and no control: the territory is basically in limbo for the duration of the war. It also no longer triggers a resistance penalty: instead, occupied territories generate resistance with time.
If the invader wishes to claim the territory, he can still do so by changing that status to something else, but by doing so the immediate resistance penalty will apply as before.

If a player loses control of all his territories in a war, he can now be automatically vassalized through a new “subjugation” action available to his opponents.
This will automatically end the war, retrocede all occupied territories to the defeated player, but integrate him to the nation of the winner with a vassality treaty that includes payments of State power and coins.
The point of this new system is to favor faster and non-destructive wars where aggressive players can still express their bloodthirstyness for imperialism and annex weaker players, while leaving these players alive and in control of their cities afterwards, able to keep playing.
IT also makes the annexation of inactive cities much easier.

This updates also brings a ‘territorial statuses’ overall, changing how they work. Each status now has its own set of properties and permissions, and they are all listed in a new territorial status menu available from the region’s menu.
Colonies now have different properties than before, and behave in a much more similar way as your own cities. Building and managing its resources is now allowed, to make them easier to manage. However it contributes little to your culture, and provides limited income.
Another status was added: the outpost. It acts like a smaller colony, it’s not a potential player spawn, but unlike the colony it provides 0 income and has all the maintenance costs. Its an expensive status, but useful for small settlements made to exploit strategic resources you can’t get otherwise.

The subjugating update
v0.0.25.x
– territorial statuses overall: now each territorial status has can have its own specific properties and permissions (resour
– overdraft is now forbidden in colonies and outposts
– building and controlling resources of colonies is now allowed
– added ‘outpost’ territorial status: similar to colonies but is not a player spawn and has expenses. good for small settlements to exploit strategic resources.
– added ‘occupied territory’ territorial status: default status or any invaded territory during a war. costs no state power, has no expenses and no incomes. generates no initial resistance, but resistance grows in time.
– changing some territorial status (ex changing status of a colony) is now possible, but can trigger loyalty penalties
– IP & steam ID can now be hidden by changing the config.ini file (for streamers).
– added ‘subjugation’ action, available when at war with a character that no longer controls any territory. this action ends the war, joins the character to the nation of the winner, auto creates a vassality treaty (paying tribues), and also retrocedes all occupied territories to the defeater character.
– fixed some issues and exploits related to treaties
– reworked worldmap display layers when zooming out: now showing state & nation names at max zoom out.
– removed action auto-encampment for some actions (raids, claims…). auto-encampment is now displayed on the action a wheel with a small tent next to the AP cost.
– improved windowed mode: client starts properly maximized and server will auto-minimize when starting.
– improved display resolutions: splitted UI and viewport resolutions, now using a more intuitive % unit.
– improved territory menu, simplifying the top part by removing non essential informations.
– added detailed trade balance at the government level.
– herds can spawn hostil animals (wolves, bears)
– primitive tribes can now respawn if no player is settled nearby
– worldmap spawn points (primitive tribes) are now more dense and concentrated in a single region of the worldmap instead of all over the map.
– improved region generation of lakes to make them more interesting (islands, tiny rivers, more random shape, no longer always in the middle of the region).
– increased amount of rivers in the worldmap, and fixed bug causing “squares” of rivers.
– Annex tool now only displays links of annexes belonging to the same owner as the selected annexes.
– Annex tool now allows to click on owners, which auto selects all the annexes belonging to that owner.
– fixed bug with changing home of formations
– fixed bug with too many herds spawning on the worldmap

After many years of work, and more than a year in closed testing, i’m proud to announce that i will finally be releasing Ymir on Steam, in Early Access, on March 15th!

Pricing will vary depending your region. It will be available for 30€ in the EU!