As the game is now playable for a minority of testers, here’s a recap of the last updates, including the newest one of today!

The treaty renegociation update
Added missing diplomatic tools for treaties allowing to renegociate, modify, and ending them. Rebalanced life-quality bonuses.
v0.0.9.x
– cannot recruit new troops in a formation if outside home region
– fixed misc issues and bugs
– fixed missing cider mills buildings
– fixed problems with the ‘truffles’ resource
– added terrain tile infos when holding right clic on the terrain
– increased efficiency from 1 to 1.2 of woodcutter 1, and added +2 to its range.
– tiles covered by buildings can no longer be exploited for resources ( –> trees covered by fields will no longer be exploitable by woodcutters )
– hammers and axes less expensive in higher tier metals
– increased life quality bonuses of all houses.
– increased life quality bonuses of satisfied higher level needs
– richer classes are no longer served first for resources equally affordable by poorer classes.
– fixed a pathfinding fatal error
– added server.bat in game folder allowing to start server directly
– added game loading and creation UIs on the server allowing to create new games directly from the server
– improved “first builder” victory mission procedural objectives
– treaty breaking close of “coins penalty” is now a % of GDP instead of a fixed amount of coins.
– it is now possible to terminate treaties without breaking closes if both parties agree on it
– it is now possible to renegociate existing treaties if both parties agree to a modification
– fixed the non-working treaty counter-proposal option

Small improvements update
v0.0.8.x
– fixed misc bugs
– animal ‘camps’ no longer placed in region center, avoiding automatic hunters to start in the same position as the animals
– event-spawned units no longer invade regions
– editor locked
– its now possible to create treaties with no honor engagements.
– smaller tribes of porkoderthals with more loot
– right-click on a building button allows to build its previous obsolete version when relevant
– the defender can now admit defeat when an attacker has compelted his objective, ending the battle instantly without needing to wait for them to retreat
– fixed issues with culture changes and resistance when invading a city
– fixed issues with missing battle events
– fixed issues with average score triggering instantaneous gameover
– improved revelance of procedural objectives for victory missions to be more accessible and relevant to the situation of current players
– added notification to all players when a victory mission is completed
– implemented server passwords, ‘friends only’ and ‘private’ games.
– fixed ability to launch server by shortcut(edited) 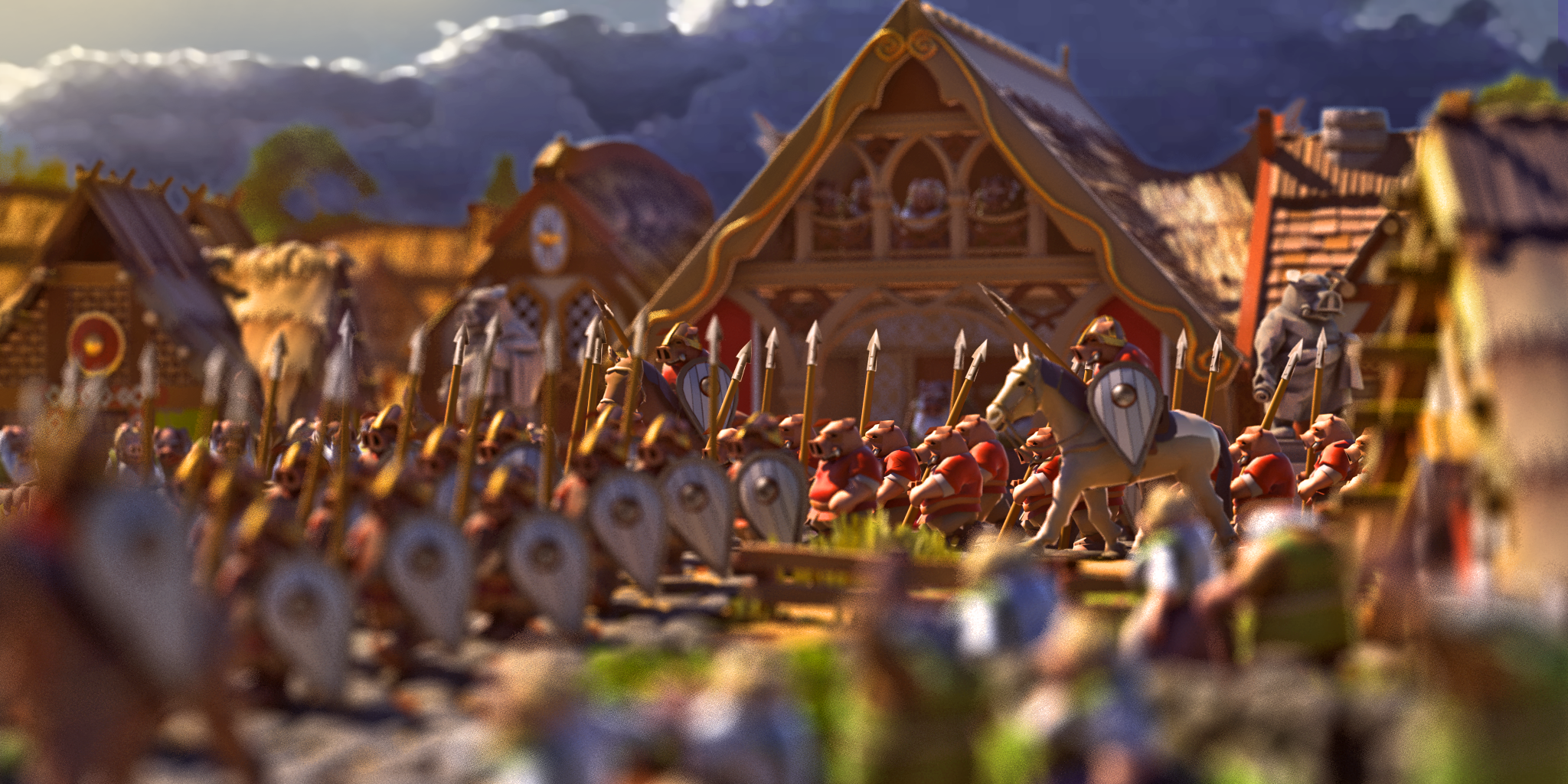 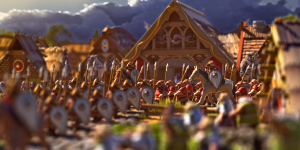 After many years of work, Ymir is now finally in closed Beta and being tested by its first ‘external’ players for the past 2 months.
Since then , the Ymir Discord (directly accessible from this website)  has become the main place of activity for the ‘community’ of the game and to follow the project more closely which is also why i’ve been late in posting news about the progress of the game here.
In the discord, some members received temporary ‘pig pioneer’ status with access to the closed beta and received a temporary steam key that will be revoked when the testing phase is over.

Patreon and game keys
But besides that, I’ve also opened a Patreon account and I decided to add some rewards as promised after the initial objective of 200$ per month was reached.
From now on, all donators who accumulate lifetime donations of 40$ or more will receive a permanent key of the game (accessing the closed beta as well but not revoked when its over).
– Patreon emphasizes monthly donations, but if you wish it is possible to donate only for one month and then cancel your pledge the next month. You can donate 40$ only for one month and receive a key to access the game.
– 40$ is more than what the game will be initially sold for on steam at its release. Its a way to support the development of the game and not just a “pre-sale”. If you’re only interested in buying the final product for what it’s worth, its probably best you wait for the actual release!
– For now, payments on Patreon are only processed at the beginning of the next month. You can still cancel during the whole time before that! But that also means you will only receive the key once the payment is processed the next month.
Besides the Patreon i’ll probably still release ‘pioneer’ free but temporary keys to testers, but at my own discretion on the Discord!

Victory missions are common to all players and only the first one to complete it gets permanent victory points in rewards. Victory missions include objectives such as being the first to produce or accumulate some resources, discovering a new tech, reaching a certain level of population intelligence, amount, or life-quality in your city etc…
The objectives are procedurally generated depending on the current state of all players to be reachable but not too easy to complete.
Then there’s the score, calculated by combining various stats of your society : wealth, culture, knowledges (techs) and military strength.
Based on the scores of all current characters, an ‘average score’ is calculated plus a score cost for victory points.
All characters with a score higher than that average receive victory points based on the score cost of each point. example if you have a score of 1800 and the average is 1400 and the score cost of each point is 50, you’ll receive 8 victory points. Unlike the victory points from missions, the ones earned from the score fluctuate and you can earn or lose them depending of how your score evolves in relation with the average one. Its also not possible to win the game only with score points, in all cases you need to complete at least a few missions to win.

Servers lobby
I added basic support of steam lobbies, and created a server list making it easier to see and join games instead of relying on direct IP only.

Terrain tile infos
Maintaining right-click now gives infos about the hovered terrain tile : fertility level, terrain type, objects on it like trees, and also listing of all potential resources exploitable on this tile allowing you to identify ores and such. 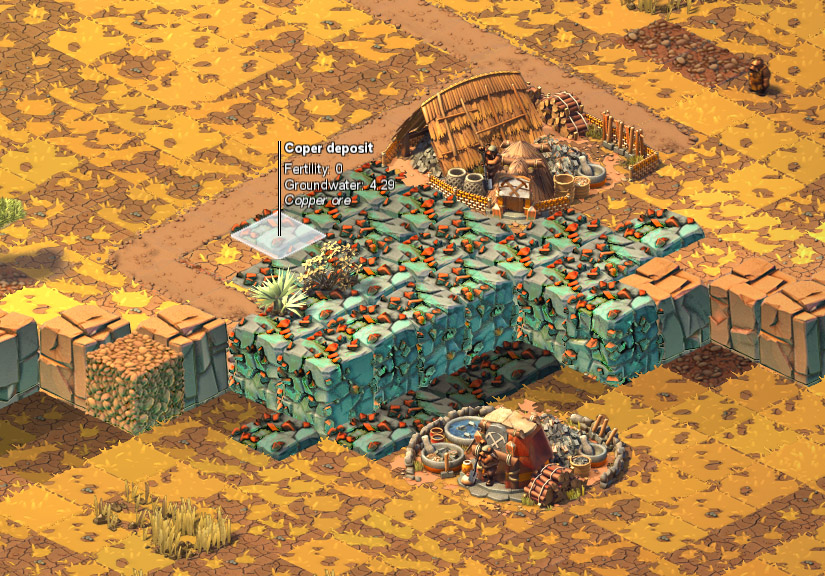 Resource locators
Still based on testers feedback, i added ‘locators’ that will help you see exploitable resources when placing buildings such as the Hunter or the Gathering camps.

Tutorial
A starting tutorial, Sagacious Pig, has been added to help new players in the game step by step based on the feedback from the first testers.
Additional parts to the tutorial are planned and remain to be added.

Besides all that, most of the work has actually been about fixing countless issues, bugs, and re-balancing things in the game.

Why Patreon rewards & personal situation
This is the result of 2 things.
First the fact the Patreon reached its goal of 200$ for which I had promised rewards, and secondly the fact that my financial situation is a bit tricky right now so i could use the help

.
As i explained in Patreon, i would like to relocate before releasing the game. But currently I depend on a small state subsidy which i’d really like to stop relying on. If I relocate, I obviously lose it, and without it what’s left of my savings won’t last more than a few months….
So i’m stuck and right now my best hope would be to be able to replace that subsidy with Patreon. This way i would be able to relocate where i need to for the release. I would still be depleting my savings, but at the same rate as I am right now here which still gives me some time!
Without it i’m not sure yet how i’ll manage relocate and might have to do everything last minute which is a bit complicated or loan money which i’d like to avoid at all costs…
I have to say reaching the goal of about 800$ a month would be a tremendous help for me and would solve quite a stressful problem i have to deal with in parallel of working on the game itself!