Finally i’ve started implementing new features to Ymir since the Alpha 1 prototype. I’ve designed and almost completed the implementation of ‘politics’, and also made this new government menu to manage it.
Politics are completely modular, and although that can create some confusions i’ll need to sort out with time.
You have a list of ‘policies’ organized in categories. Each policy has one or more effects.  The system is modular, so policies can be combined in any way you want.
On the left column you can see a summary of all the effects of all the currently active policies, and on the right you can manage each policy per category, add new ones or remove them. 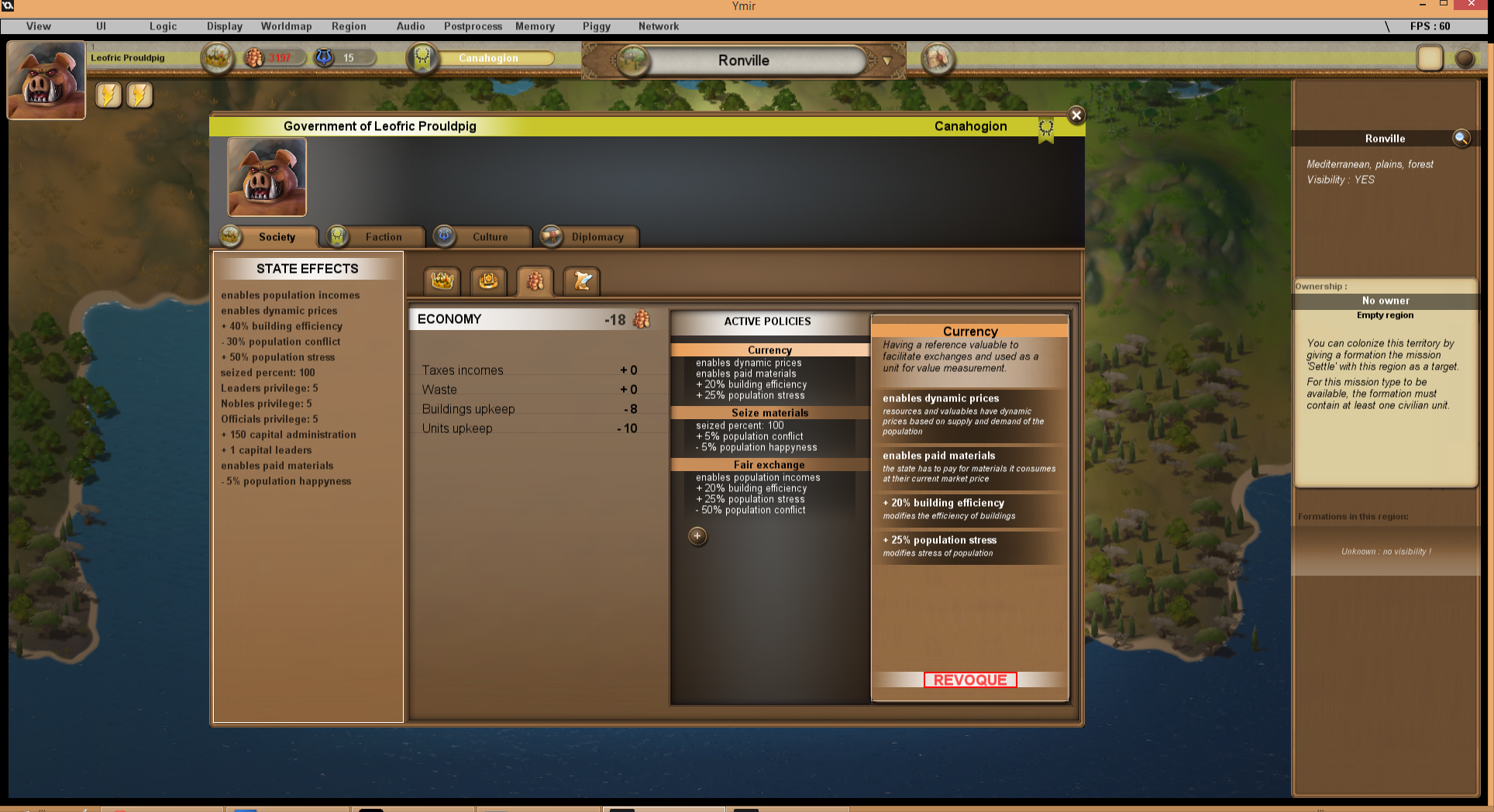 You start only with default policies as active, and you’ll unlock new ones as you develop technologically.
You start as a “band society” with a “gift economy”. This matches the most primitive forms of societies : small famillial groups with informal leadership and where people exchange things without expecting immediate reward.
This isn’t translated ingame only with stats modifications, but also in gameplay itself: entire mechanics can be locked or unlocked by these policies. For instance in such a primitive society there is no “money”, meaning you have a state have no income but also no expenses, all resources are automatically available to everyone and there is no need for organized distribution through merchants and markets yet.
Then as you evolve you can enable new policies like the notion of “Fair exchange” , meaning that instead of giving everything for ‘free’ ( expecting later rewards ) , people now exchange things expecting immediate reward  ( exchanging things of ‘equivalent values’ to make it fair : barter economy ).
In some cases, the decision to enable some policies when they become available will be pretty much automatic like that one, because you can’t really expect to build a large society with a gift economy…  but well , actually nothing will prevent you to try if you want!
For now i’ve added about 20 policies in 4 categories : power, legitimacy, economy , social.

Power
Power is how you organize the exercise of power in your society. You’ll find policies allowing you to do things like appointing local chiefs in each region, governors in each city allowing you to form provinces, or having parliamentary structures like a Senate…

Legitimacy
Legitimacy is about why the leaders of your society claim they should rule.
You can rule because you claim beeing superior to others, because you’re a god, because you’re chosen by gods and rule in their name, because you rule for the common good in the name of the people or because you rule as a representative of the people.
You can combine these as you wish. These claims then define which variables are taken into account to compute the actual legitimacy of your government.
For instance if you claim to rule as a representative of the people but without having any parliament or anything actually representing the people, this will be an empty claim giving you no legitimacy. So you’ll need to decide why you rule but then also do what it takes to make it credible enough to actually get legitimacy.
Things linked to gods will depend highly of religion of course.
Things like claiming to be a living immortal god will also depend on how superior you look to your people. So having your leader living in a commoner’s house is probably not going to be a good idea… Instead, building massive monuments in his name like a Pharaoh is probably what you’ll want to do.

Economy
Then you can manage your economy : currency, taxes, coinnage, representative money etc.
These affect directly the economic simulation, like unlocking dynamic population wealth or dynamic prices, the fact you’ll have to pay for materials when building something or not, the ability to setup foreign trade routes, or how your stocks of gold ingots can provide wealth with the use of representative money…

Social
As for social policies, for now its just limited to deal with government members. There is 3 population classes for government members : leaders, nobles and officials. There’s usually only one leader in the capital. Nobles depend of your power policies: for exemple having “local authority” enabled means you assign one local chief to each region, and that will show up ingame as having one noble in the population or each region.
Officials are the lowest class of government employees, you’ll get these from state buildings having “officials” as workers.
As part of the government these classes don’t get any regular incomes but with social policies you can give them privileges (they’re directly awarded a portion of the region wealth) or a fixed salary… or both.